The ALRC’s first Interim Report as part of a three-year review of complexity in Commonwealth legislation regulating corporations and financial services was tabled in Parliament by the Attorney-General of Australia, Senator the Hon Michaelia Cash on 30 November 2021. This Interim Report focuses in particular on the use and design of definitions in legislation.

The ALRC seeks feedback on 16 proposals, and 8 questions in relation to reform of corporations and financial legislation. Submissions are due by Friday 25 February 2022. The report contains 13 recommendations for reform, relating to relatively technical matters, which the Government could begin implementing immediately.

The laws regulating corporations and financial services are uniquely and unnecessarily complex. The Interim Report includes innovative research into the extent and nature of complexity in legislation, using empirical data and computational analysis to demonstrate the ballooning volume of law.

The report includes a draft model for how the law could be designed to make it easier to find relevant requirements, and exceptions to those requirements.

In respect of the proposals and questions, the ALRC is seeking written submissions from stakeholders. Submissions, together with further consultations, surveys, workshops, and seminars, will form part of the evidence base for subsequent Interim Reports and the Final Report.

Submissions are invited until 25 February 2022.
Download the Summary Report.
Download Interim Report A.
Hard copy versions of the report are also available to purchase. 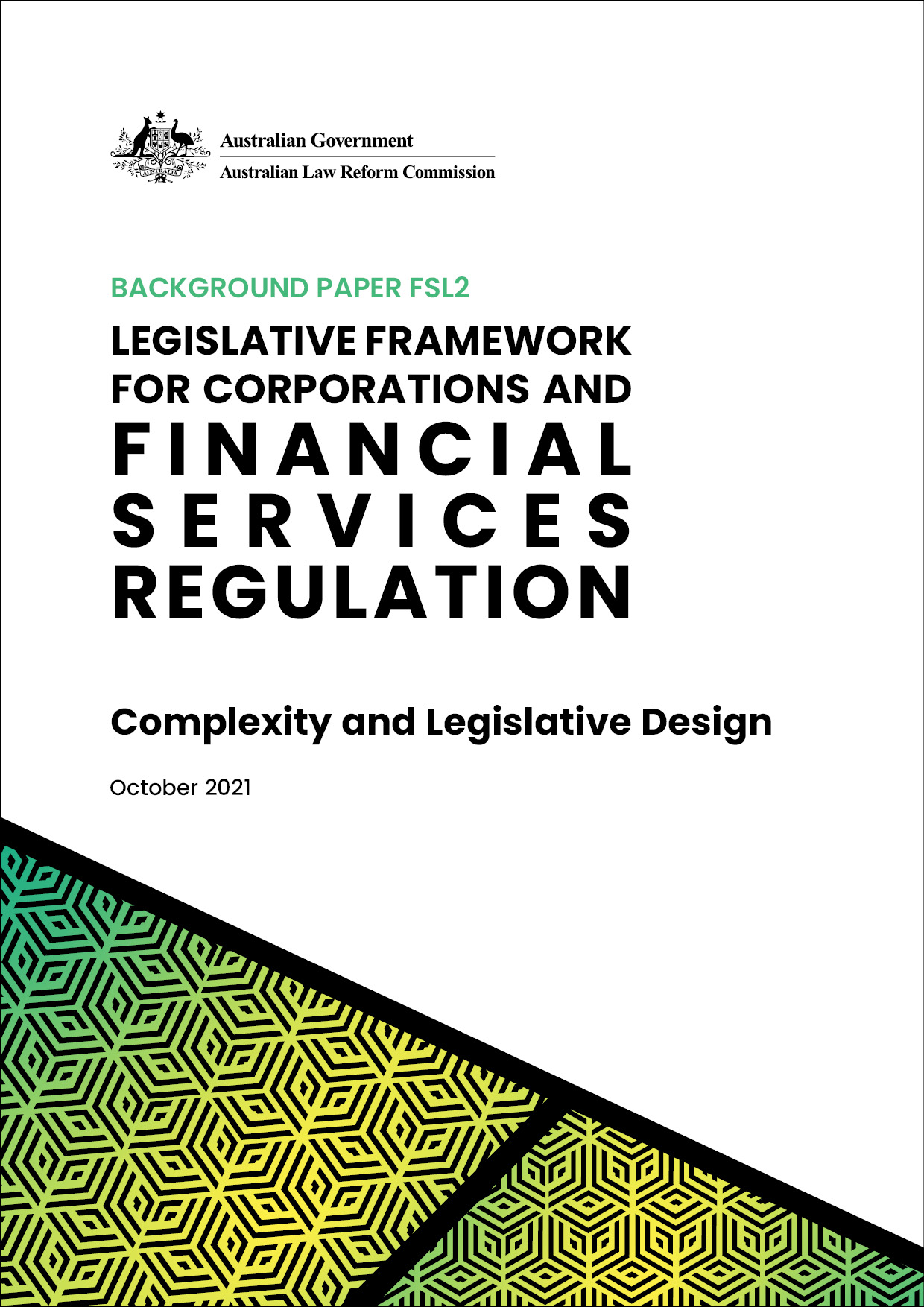 The Corporations Act has turned 20, but how much do you really know about its past? Find out in our latest Background Paper: Historical Legislative Developments (FSL4)

The ALRC has released four background papers as part of its Review of the Legislative Framework for Corporations and Financial Services Regulation.

On Monday 6 December the ALRC Judicial Impartiality Final Report was submitted to the Attorney-General of Australia, Senator the Hon Michaelia Cash. We look forward to participating in public discussions on the recommendations in due course.

In April 2021, the ALRC published a Consultation Paper containing questions and draft proposals for public comment.

Accompanying the Consultation Paper are a series of background papers which are intended to provide a high-level overview of key principles and research on topics of relevance to the Judicial Impartiality Inquiry:

Submissions in response to the Consultation Paper are available to view on the ALRC website.

On 25 November 2021, the Religious Discrimination Bill 2021 (Cth) (‘the Bill’), and associated legislation, was introduced into the Commonwealth Parliament.

In accordance with Terms of Reference issued by the Attorney-General on 10 April 2019 and amended on 29 August 2019 and 2 March 2020, the Australian Law Reform Commission (ALRC) will conduct an Inquiry into the framework of religious exemptions in Commonwealth anti-discrimination legislation if, and when, the Bill is passed. At such time, the ALRC will conduct extensive research, and will consult widely, including with people who have expertise in the laws under review, as well as people likely to be affected by the laws in question.

If and when the Inquiry gets underway, the ALRC will provide regular updates on the progress of the Inquiry, including updates on how interested stakeholders can engage in the law reform process. For more details, see the ALRC website or email: religion@alrc.gov.au.